Two weekends ago I went to Disney World!
As I’m sure most of you know (and if you don’t I’m about to tell you) I used to work at Disney World.   I worked there for a total of 6 years.  It all started in the Spring of 2008, when I worked as a lifeguard at the Animal Kingdom Lodge.  Then in the summer of 2009 I worked there again, this time at Hollywood Studios.  And most recently I worked there full time from 2011-2014 in Guest Relations at Epcot.
Now the summer of 2009 was one of the best summers of my life.  Not because of my job but because of my roommates!  It was that summer that I met 5 (well technically 4,  since Abby and I have been friends since 2008) of the best girlfriends I could ever have hoped for.  And the best part is, we are still friends 6 years later.
We all live in different cities and all have different lives but we’ve managed to all stay friends and I love it.  I love that we have all stayed friends.  We’ve had several reunions but sadly have yet to have all 6 of us be together.  It’s always been either 4 or 5 of us.  But I’m happy to say that that is about to change!
On December 5th we will all be together again!  Because one of us is getting married! Kelly is getting married and last weekend we all met at Disney World for a super fun bachelorette weekend!
I could give tons of written details on the whole weekend, but I’m much more fond of pictures!  So here is our fabulous weekend in a few snap shots. 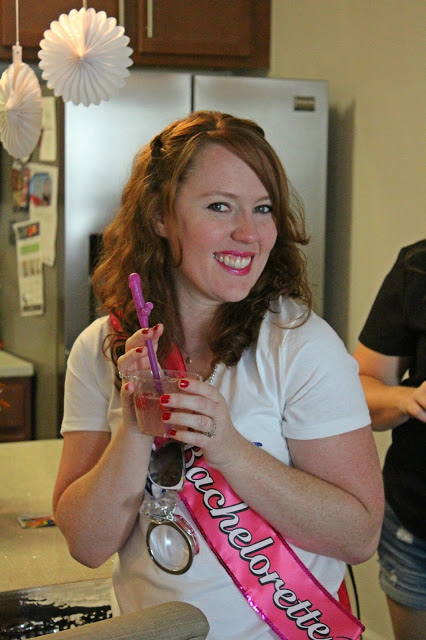 One of my best friends just started a screen printing side business and she made these adorable shirts for us. I sent her my ideas and this was the final product!  We LOVED them and got so many compliments while we were in the parks!

We started our day a Magic Kingdom!  I was dying to get some pictures of all of us in our shirts!  And to snap some pictures of the Happiest Place on Earth with my fancy camera!  Cinderella’s Castle and the rest of the Disney parks make for some amazing pictures! 🙂 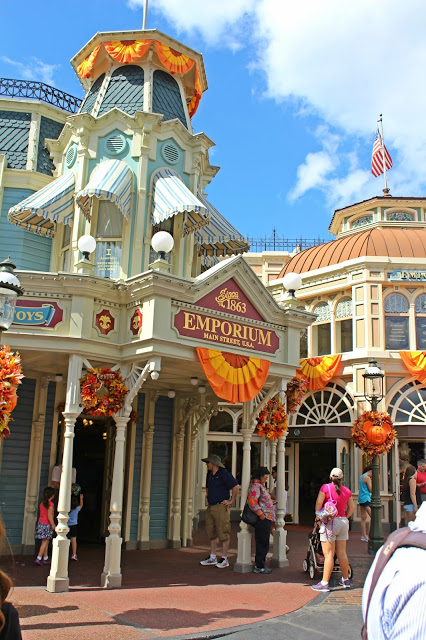 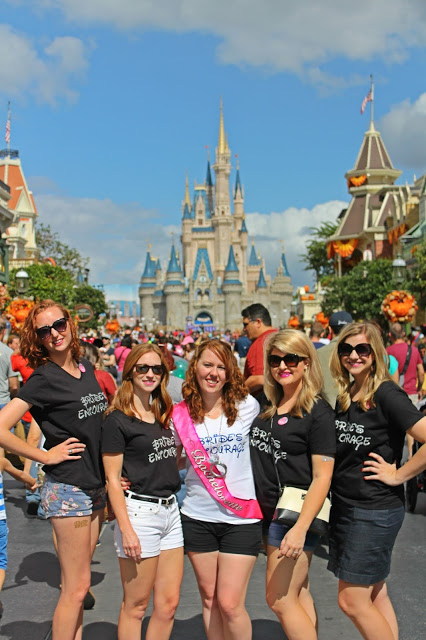 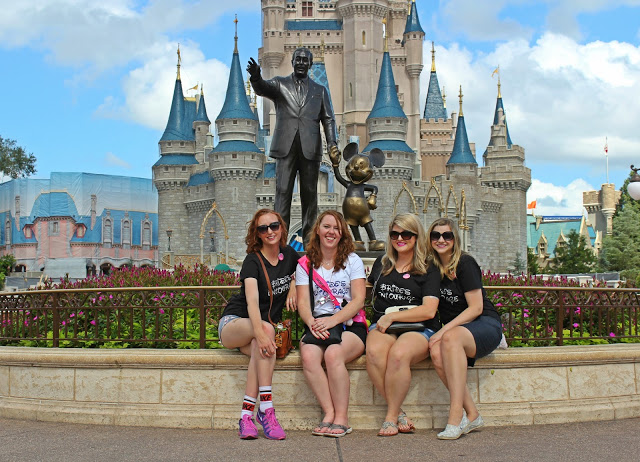 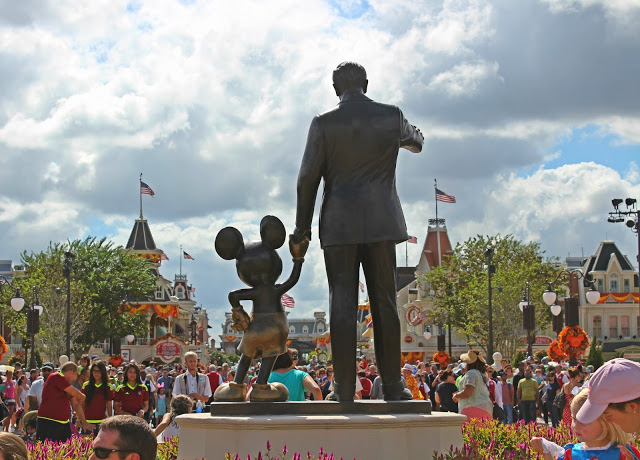 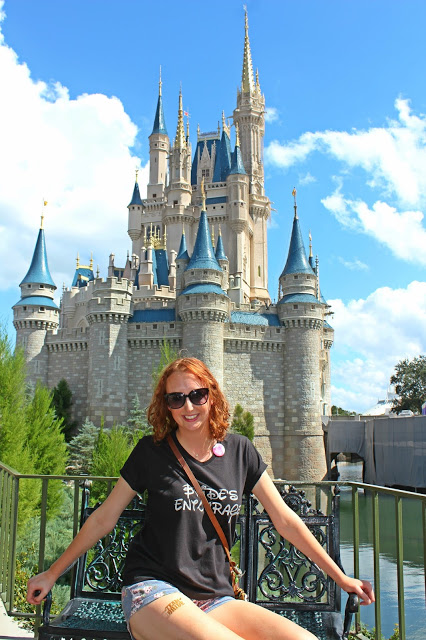 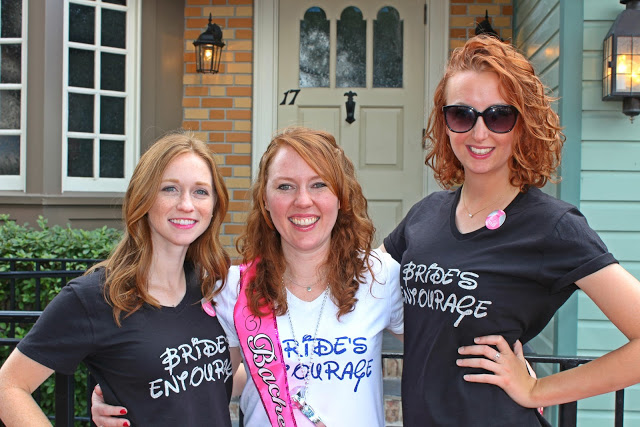 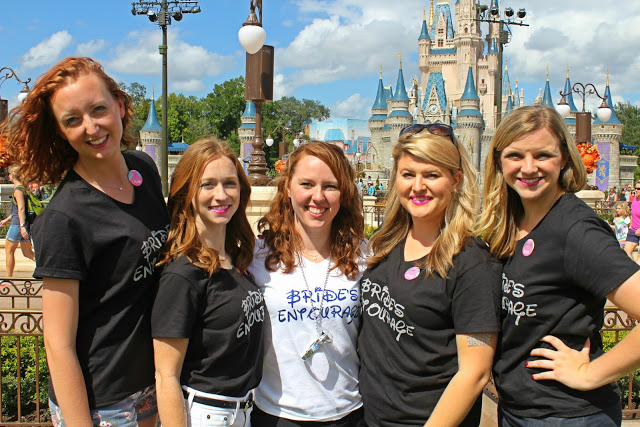 After strolling around Magic Kingdom for a little bit we made our way over to Epcot to enjoy the 20th Annual Food and Wine Festival.

Somebody got a little sleepy on the monorail over to Epcot!

If you’ve never been to the Food and Wine Festival at Epcot here are a few details:

1. It runs from the end of September until the beginning of November.

2. The World Showcase is the main location of the festival.  In between each country you will find a bunch of kiosks dedicated to cuisine from countries around the world.  South Africa, Scotland, Ireland, Belgium, and Australia are just a few of the kiosks offered.

3.  Every year the festival gets bigger and better and a lot more crowded.  So if you do plan to trip to Epcot during the festival be prepared for a ton of people and lots of drinking.  Yes, one of the big draws is the many libations one can consume and it can get a little wild once the sun goes down.  Yes, even at a Disney park.  Trust me I know.

It does make for a very fun atmosphere for a bachelor/bachelorette party though! 🙂 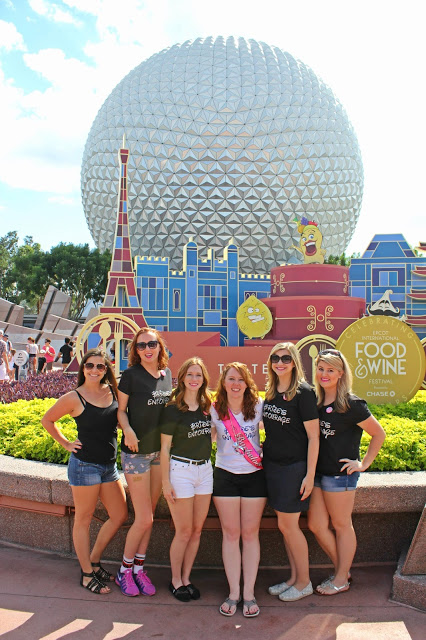 We totally surprised Kelly with our friend Katie.  We have a habit of doing that to each other.  Surprises are fun!  We told Kelly that Katie couldn’t make it.  And then she jumped into our first photo at Epcot!  It was the best! 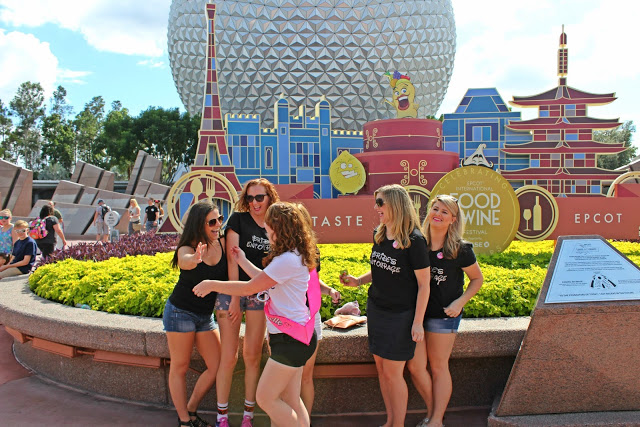 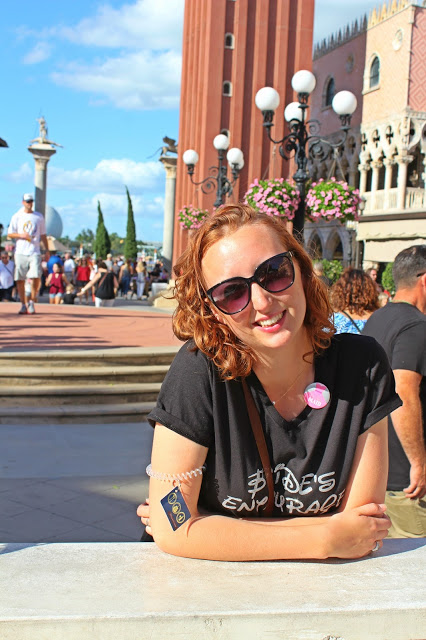 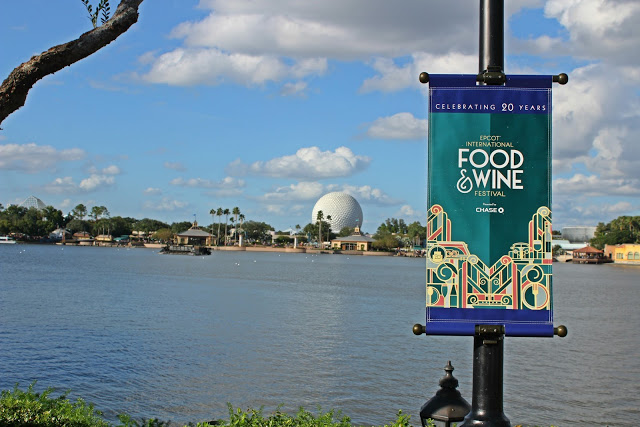 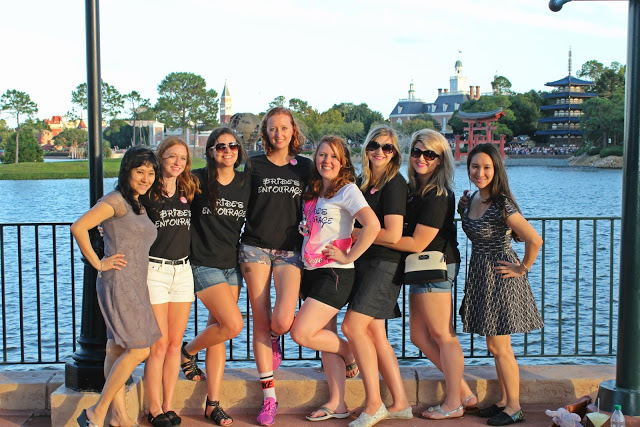 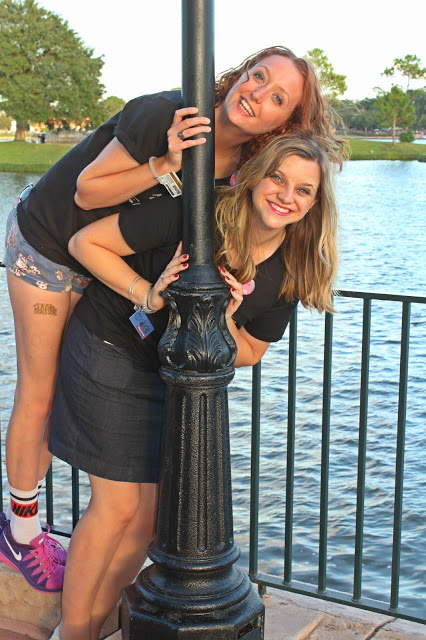 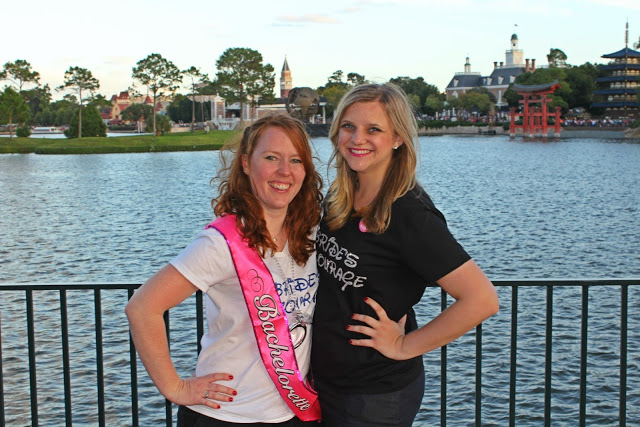 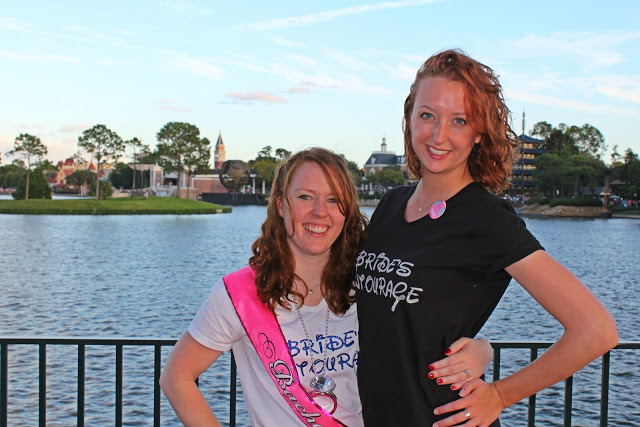 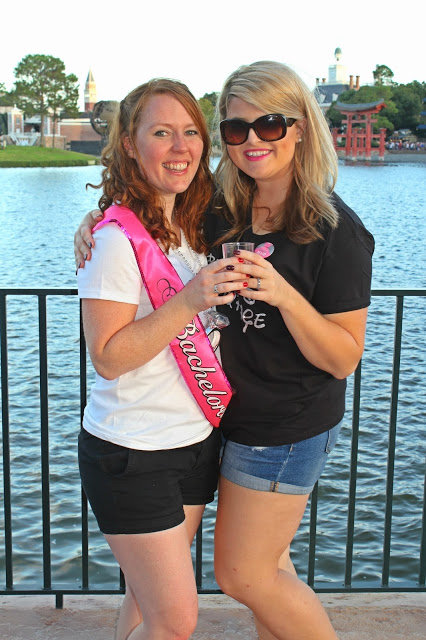 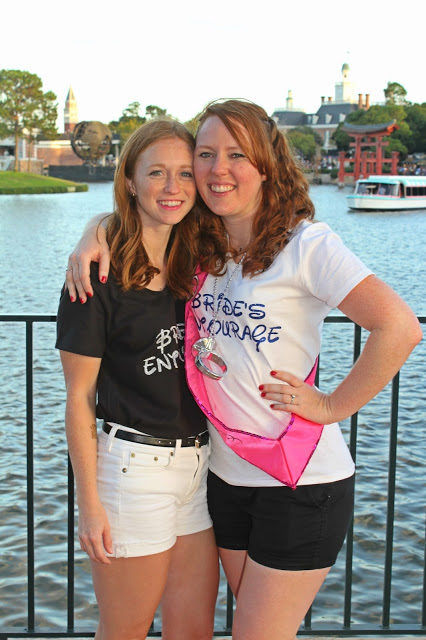 Over all it was the best weekend ever!  We all loved getting to celebrate Kelly’s last big fling before her big day in December.
For those who think Disney World is a lame place for a bachelorette party…think again!  We had a blast!  There was plenty of food and alcoholic beverages to go around and there was always something to do!  Especially with the festival going on.  Plus I got to see some of my best friends in the entire world.  It doesn’t get much better than that! 🙂
********
Side note, if you your looking for the best attractions, shows, and places to eat while in the Disney parks check out my posts on each of the four parks: Magic Kingdom, Epcot, Hollywood Studios, and Animal Kingdom)!  I wrote these while I worked in Guest Relations at Epcot so my advice is pretty solid! 🙂  I will say that the Hollywood Studios post is slightly dated.  Sadly one of the attractions I talk about being my favorite is no longer there.  Hollywood Studios is getting a major facelift.  In fact, the Sorcerers Hat was the main icon of the park for at least 10 years is gone.  In it’s place you get a fantastic vie of an exact replica of Grauman’s Chinese Theatre.  Here is it:

See….so different!
Sorry for the tangent there! Linking up for Travel Tuesday! 🙂