Y’all I am seriously kicking my 2016 reading challenge’s ass so far.  Since my last book review I have read 2 more to total 6 books so far.  I think I may even surpass my goal!  Woo hoo!
Ok so today’s book was read because of my love of the book The Royal We.  You can read my review on that American girl meets handsome heir to the British throne book here.  My friend Lauren, who is a co-worker and fellow book lover showed me this book.  We both loved The Royal We and so when she saw this one, she knew she had to show it to me.  And after reading they synopsis I knew I had to read it.  🙂 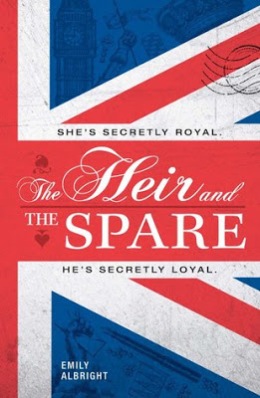 Goodreads Synopsis: Family can be complicated. Especially when skeletons from the past pop up unexpectedly. For American Evie Gray, finding out her deceased mother had a secret identity, and not one of the caped crusader variety, was quite the surprise. Evie’s mom had a secret life before she was even born, one that involved tiaras.

In this modern day fairytale, Evie is on a path to figure out who her mom really was, while discovering for herself what the future will hold. Charged with her late mother’s letters, Evie embarks on a quest into her past. The first item on the list is to attend Oxford, her mom’s alma mater. There, Evie stumbles upon a real life prince charming, Edmund Stuart the second Prince of England, who is all too happy to be the counterpart to her damsel in distress.
Evie can’t resist her growing attraction to Edmund as they spend more time together trying to unravel the clues her mother left behind. But, when doubts arise as to whether or not Edmund could ever be with an untitled American, what really ends up unraveling is Evie’s heart. When Evie uncovers all the facts about her mom’s former life, she realizes her mom’s past can open doors she never dreamed possible, doors that can help her be with Edmund. But, with everything now unveiled, Evie starts to crack under the pressure of new family responsibilities and the realization that her perfect prince may want her for all the wrong reasons.

My thoughts:  I really wanted to completely love this book.  Especially since it doesn’t look like there is going to be a sequel to The Royal We.  The story was cute and the idea is obviously one that every American girl (well most of them….ok some of them….ok ME! lol) have dreamed of.  And the book did hold my attention the entire time.  Sadly however it wasn’t fabulous.  The writing was subpar and the dialogue had me rolling my eyes more often then not.
A few times I had the thought that if I were to actually sit down and write a book, my writing might be just like this.  Which is hilarious to think about and I think that’s another reason why I didn’t outright dislike the book.  Because I would hope that some silly, overly romantic, and British obsessed girl would buy my book and like it despite my terrible dialogue.  It did have it’s funny moments though I did feel like Evie was a bit dramatic and ridiculous about 85% of the time.
So should you read it?  Meh, you could probably skip it, as long as you read The Royal We instead.  But if you’re looking for more American girl meets British boy at a university and they fall in love kinda stories, then go ahead and give this one a shot.
Happy reading! 🙂
Linking up for:

7 thoughts on “Your Next Favorite Book: The Heir and the Spare”