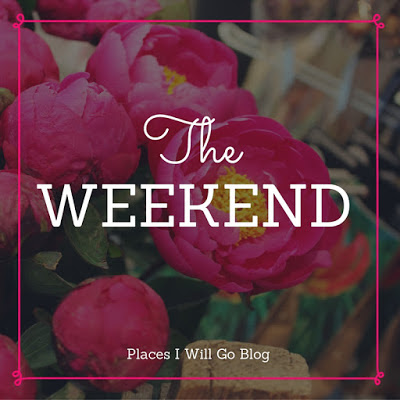 Originally I did not in fact have a post planned for today.  I was super lazy yesterday and just did not feel like sitting down at my computer and typing out the very boring post that would describe my weekend.  Because if I’m honest it was not exciting in the least.

Then at around 4:30am I woke up to some VERY loud rain, thunder and lightening.  I mean the thunder was ROCKING the house.  A few minutes later I got the word that school was officially cancelled because of the storm.  And y’all it’s still raining and supposed to rain all day and into the night.

So even though it was a very low key weekend, I thought, what the hell.

Here were the highlights:

– Friday night I attended a Thirty-One party hosted by a friend of mine.  It was a sip and shop party. So we sipped on some wine ( I mostly drank sweet tea) and shopped some of the products.  I had never really been interested in Thirty-One, but after the party I’m a huge fan.  I had my eye on a few products but I got suckered into hosting a party of my own.  So I only ended up buying a travel jewelry case.  Which I’m really excited about.  I’ll be hosting my own party in May.

– Saturday morning was spent enjoying coffee and a book.

-Saturday afternoon was a day spent out and about.

– Lunch at Chuy’s – where I some very tasty enchiladas.

– A little shopping at J-Crew and Sephora.  Right now the J-Crew Factory has a great deal on their Chino shorts.  They’re half off which makes them about $16.00 a piece.  They are my favorite shorts.  They’re just the right length (I get the 5″ ones) and super comfy.  I took a pair to Europe with me and loved them.  So I bought a navy pair and a turquoise-y colored pair.

– Sunday was 100% lazy.  I did a bit of reading, a bit of napping, and a lot of TV watching, and of course the obligatory Target trip.

Over all a very laid back and enjoyable weekend.  And now I’m off to binge watch Outlander and work on some blog posts for the rest of the week!  I am thankful that we don’t live in an area that floods really bad.  There are several areas of the city that are flooded really bad.

Prayers for the rest of the city are definitely needed!

7 thoughts on “The Weekend and an Unexpected Day Off”