Skip to content
It’s almost becoming a tradition for me to start every month with the books I read the previous month.  And you know what?  I don’t hate it.  (After I typed that, I realized I really have only done this the last two months, so question.  Is it a “tradition” if it’s only happened twice?  Probably not but oh well.
So full disclosure, I wish I dedicated more of my time to reading.  But I love TV almost as much as I loving reading so I split my time with both.  However I think the next few months TV might be taking a bit of a back seat because I am currently 12 books away from my goal of a messy 50 books for the year.  I was really hoping to surpass that goal but if I do surpass it, I’m pretty sure it will be by just two or three books.  Which is fine but I was hoping to surpass it by 15 or more.  Ce la via!
Alright lets get to the books I read the month of October.  I’ve been pretty steady at reading 4-5 books per month the last was no different.  But unlike last month, I really really liked all four of the books that I read!
So lets get to them shall we?! 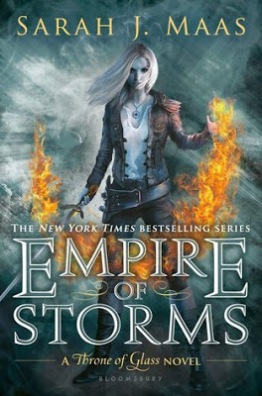 (via)
Goodreads Synopsis: The long path to the throne has only just begun for Aelin Galathynius. Loyalties have been broken and bought, friends have been lost and gained, and those who possess magic find themselves at odds with those who don’t.

As the kingdoms of Erilea fracture around her, enemies must become allies if Aelin is to keep those she loves from falling to the dark forces poised to claim her world. With war looming on all horizons, the only chance for salvation lies in a desperate quest that may mark the end of everything Aelin holds dear.
Aelin’s journey from assassin to queen has entranced millions across the globe, and this fifth installment will leave fans breathless. Will Aelin succeed in keeping her world from splintering, or will it all come crashing down?

My thoughts:  I have been waiting for this book for over a year and it did NOT disappoint!  It’s the 5th book in the Throne of Glass series.  I started the series last year and fell completely in love with it and thankfully the 5th book was no different.  I love the way the story is going, I love the characters,  and I love the setting.  I also love that Sarah J. Maas does a great job connecting all of her books.  This one was no different.  I can’t say too much because I don’t want to spoil the book and the series, but trust me, this is as series you want to read.  I think I’ve said this before but I’m gonna say it again, if you decide to read the series, start with Assassin’s Blade.  It’s actually a book of novellas that she wrote after she finished the 3rd book i believe.  But starting with Assassin’s Blade will help you understand the main character SO MUCH BETTER!  And will help you enjoy the later books much more too!  I won’t say why, but just know it does!  🙂
BAH…I love these books! 🙂

(via)
Goodreads Synopsis:  Feyre survived Amarantha’s clutches to return to the Spring Court—but at a steep cost. Though she now has the powers of the High Fae, her heart remains human, and it can’t forget the terrible deeds she performed to save Tamlin’s people.

Nor has Feyre forgotten her bargain with Rhysand, High Lord of the feared Night Court. As Feyre navigates its dark web of politics, passion, and dazzling power, a greater evil looms—and she might be key to stopping it. But only if she can harness her harrowing gifts, heal her fractured soul, and decide how she wishes to shape her future—and the future of a world cleaved in two.

With more than a million copies sold of her beloved Throne of Glass series, Sarah J. Maas’s masterful storytelling brings this second book in her seductive and action-packed series to new heights.

My thoughts:  This is the second series by Sarah J. Maas and y’all, it’s just as good as the Throne of Glass series.  I may even be a little but better.  I personally like the sequel as even better than the first book, A Court of Thrones and Roses.  Which is weird for me because very rarely do I like a sequel more than the originial.  But it is 100% true of this one.  The characters are so much more developed in this novel, the world of High Fae is explained in more detail and you get completely submerged in Feyre’s world.  AND THE ENDING!!!!!  OH MY GOSH THE ENDING!! SO GOOD!  Sorry I’m yelling but it really was that good.  It has me desperate for May!  That’s when the third book comes out.
Sarah J. Maas is on a roll y’all.  She’s got two very successful series and they are both so good! I can honestly say she’s become one of my favorite authors.  I know I’ll read just about anything she writes from here on out.

(via)
Goodreads Synopsis:  Inspired by the life of a real World War II heroine, this debut novel reveals a story of love, redemption, and secrets that were hidden for decades.

New York socialite Caroline Ferriday has her hands full with her post at the French consulate and a new love on the horizon. But Caroline’s world is forever changed when Hitler’s army invades Poland in September 1939—and then sets its sights on France.

An ocean away from Caroline, Kasia Kuzmerick, a Polish teenager, senses her carefree youth disappearing as she is drawn deeper into her role as courier for the underground resistance movement. In a tense atmosphere of watchful eyes and suspecting neighbors, one false move can have dire consequences.

For the ambitious young German doctor, Herta Oberheuser, an ad for a government medical position seems her ticket out of a desolate life. Once hired, though, she finds herself trapped in a male-dominated realm of Nazi secrets and power.

The lives of these three women are set on a collision course when the unthinkable happens and Kasia is sent to Ravensbrück, the notorious Nazi concentration camp for women. Their stories cross continents—from New York to Paris, Germany, and Poland—as Caroline and Kasia strive to bring justice to those whom history has forgotten.

My thoughts:  Of course I couldn’t get through the month without another World War II historical fiction novel.  And boy was this one heavy.  I loved reading the different perspective of the three different women.  I will say that I found that I probably could have done without Caroline’s portions but I know why she was included.  She as the author’s original inspiration for the novel.  But I would have been perfectly happy just reading from Herta and Kasia’s point of view.  This was definitely one of the heavier World War II books I’ve read.  It felt a little more person because the focus was on women in concentration camps and I just cannot imagine having gone through what the ladies sent to the Ravensbrück  concentration camp went through.  I will say I was a tad disappointed with the end of book.  I felt that it ended very abruptly and I wanted more.
This book is definitely worth the read but be prepared for lots of emotions when you’re done.  Plus the cover is gorgeous!  I may or may not have bought the hardback version just to add it to my bookshelf of pretty things.

(via)
Goodreads Synopsis:  One Life to One Dawn.

In a land ruled by a murderous boy-king, each dawn brings heartache to a new family. Khalid, the eighteen-year-old Caliph of Khorasan, is a monster. Each night he takes a new bride only to have a silk cord wrapped around her throat come morning. When sixteen-year-old Shahrzad’s dearest friend falls victim to Khalid, Shahrzad vows vengeance and volunteers to be his next bride. Shahrzad is determined not only to stay alive, but to end the caliph’s reign of terror once and for all.
Night after night, Shahrzad beguiles Khalid, weaving stories that enchant, ensuring her survival, though she knows each dawn could be her last. But something she never expected begins to happen: Khalid is nothing like what she’d imagined him to be. This monster is a boy with a tormented heart. Incredibly, Shahrzad finds herself falling in love. How is this possible? It’s an unforgivable betrayal. Still, Shahrzad has come to understand all is not as it seems in this palace of marble and stone. She resolves to uncover whatever secrets lurk and, despite her love, be ready to take Khalid’s life as retribution for the many lives he’s stolen. Can their love survive this world of stories and secrets?
Inspired by A Thousand and One Nights, The Wrath and the Dawn is a sumptuous and enthralling read from beginning to end.

My thoughts:  I added this book to my tbr after seeing it on Kristen’s photo of the 500 library books she checked out.  Ok it wasn’t 500 but close! ; )  Anyway, I saw the title and it caught my eye so I added to my TBR list, and then spoke with some of my reading teacher friends who had already read it and they said it was good.  So I trekked to my own library (I’m trying to save money) and wah-la!  Loved the fact that it’s based in the Middle East.  I rarely read books based in that part of the country and so it was a very refreshing read.  I loved the detail she gives about the food, clothing, and daily life in that part of the world!
I was very impatient while reading the book though because I was dying to know why these brides were being killed.  And of course you don’t find out until the very end of the book. I will say I would have liked a little more of an introduction at the beginning.  I felt like the book jumped right in and didn’t really set up the beginning very well.  That was one of the things that prevented me from giving it five stars on Goodreads.  I’m excited to read the sequel though because I’m hoping we get a little more development in the relationship between Khalid and Shahrzad.  I didn’t quite buy their love story in this book, which is another reason I didn’t give it five stars.  But I have a feeling it develops much more in book two!
Even though I only gave it 4 stars I still really enjoyed the book.

******
Overall I thoroughly enjoyed every since book I read the month of September.  I recommend them all to everyone.  In my humble opinion they’re all worth reading! ESPECIALLY the books by Sarah J. Maas.  She’s talented y’all!  Real talented! 🙂

12 thoughts on “Your Next Favorite Book: September Reads”